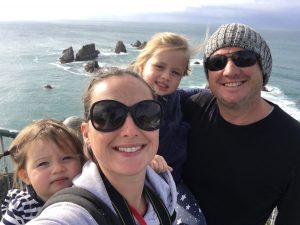 Clare graduated at the University of Melbourne with a Bachelor of Science majoring in marine biology and zoology in 2005, having wanting to be a marine biologist from the age of 6. After university, Clare moved to London for a few years working and travelling and exploring the world – a drive that had been ignited as a 19 year old on her first adult overseas adventure with her cousins.

Once the wonderment of travel had been ignited, Clare made a pact with herself that she would put the discovery of new places, people and experiences as a priority… and has so far kept that promise, 12 years later.

After returning home to Australia after travelling for some months through India and South East Asia, Clare started working in the construction industry, at first in the corporate world and later out on large scale construction projects around Australia.

While working the 9-5 gig, Clare, always one for learning something new, decided to finally give silversmithing a go, after many years of wanting to try it. And boom! A new found passion was discovered.

A few years later, and on another construction project in Byron Bay, newly married and some further travelling expeditions having been experienced, Clare decided to take her silversmithing hobby to the next level. Clare Quinlan Jewellery was born in 2014. Tools and materials were purchased, new designs created and shops came on board to stock her handmade creations.

In 2018 Clare Quinlan Jewellery was rebranded and relaunched with a new website, new designs and a new direction.

Clare is currently living in Melbourne, Australia with her husband, two beautiful daughters – Heidi & Emma, 5 chooks, 7 quail and 2 stick insects.
And continues to enjoy travelling Australia and the world with her young family, exploring different cultures, people and places and gathering inspiration for new designs and collections.