Gem stones have long held different meanings and been believed to contain abilities to channel certain attributes and powers. From biblical times and Hindu traditions, stones have intrigued people for centuries. Typically there are 2-3 stones for each month and often incorporate the stones that represent the zodiac signs in that month.

In addition to stones that represent the months and the signs of the zodiac, there are also stones that correspond to the ‘planets’ (or the celestial bodies that were known in ancient times), the days of the week and the seasons.

So there is an abundant variety of stones to choose from… what most resonates with you? 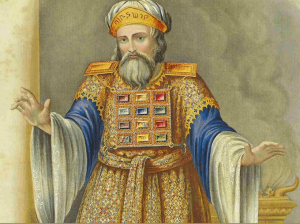 In the bible, the breastplate worn by Aaron, the first high priest of the Israelites, was adorned with 12 gems, each representing the 12 tribes of Israel.

According to historical documents, these stones were said to be carnelian, chrysolite, beryl, jacinth, agate, amethyst, topaz, onyx and jasper. However, in ancient times, gems were named dependant on their colour rather than their mineral compositions as they are today, so it’s difficult to determine if the stones mentioned were indeed the stones we know by those names today.

The writing of historians in the 1st and 5th centuries made connections between the 12 stones and the 12 months of the year, with people in the 5th century collecting all 12 stones to wear at one time in belts and bracelets. By the 8th and 9th centuries, this trend had evolved in which people would own the whole set of stones, but only wear one per month – the month it corresponded to and which it was thought to be strongest. These traditions slowly receded until the 16th century in Germany or Poland (unclear), where it became common to wear the one stone representing a person’s birth month throughout the year.

The Ratna Pariksha is a 5th century hindu text that chronicles the relationship between gemstones and deities, celestial bodies and days of the week.

Hindu practices associate 9 gemstones with different planets and celestial bodies, and certain individual stones are suggested by Vedic astrologers based on astrological birth charts. Here the stones are used to harness the power of particular planets and protect the wearer. Navaratna jewels are jewellery pieces that contain each of these 9 gems. 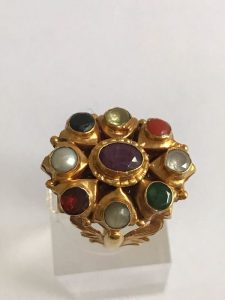 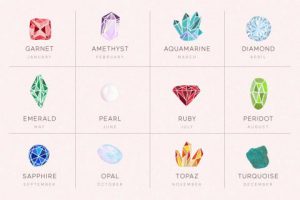 The modern tradition of using particular stones to represent your birth month or zodiac sign was solidified in 1912, when the National Association of Jewelers (American Jewelers Group) officially standardised the birthstones and each month that they represented.

This list combined various customs and traditions from throughout the world, while also ensuring jewellers could sell and promote large quantities of the gems.

This has remained largely unchanged until some stone introductions in1952 and the introduction of Tanzanite as a December stone in 2002.

Not only are the months represented by different stones, but the zodiac signs, the days of the week, the seasons and the planets each have their associated stone/s. This provides us with a lot of opportunity to find a stone that represents our own uniqueness and resonates with our ways of being.

Check out the lists below to see what stones represent you according to the charts. 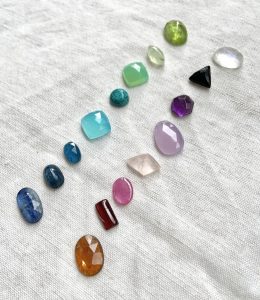 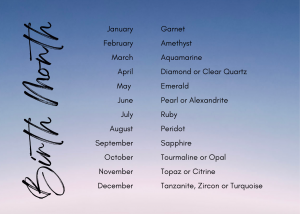 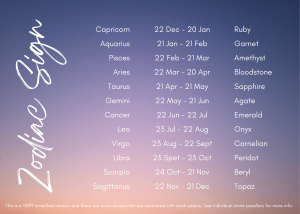 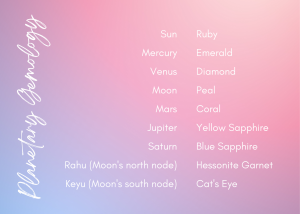 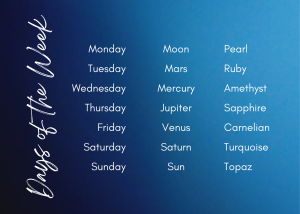 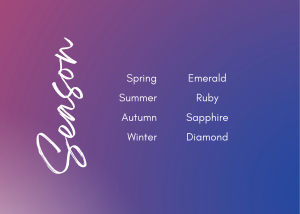 SHOP ONE OF A KIND DESIGNS NOW